Rougly a year and a half ago, I was preparing for a convention. I was going as my original character, and I have a tendency to add something little to it each time I wear it someplace. I drew a picture of a long knife, with a bayonet-esque blade, yet with the certain cobbled-together-feel. I never got around making the knife, as I was on a tight schedule back then. About a week ago, I decided that itis time. 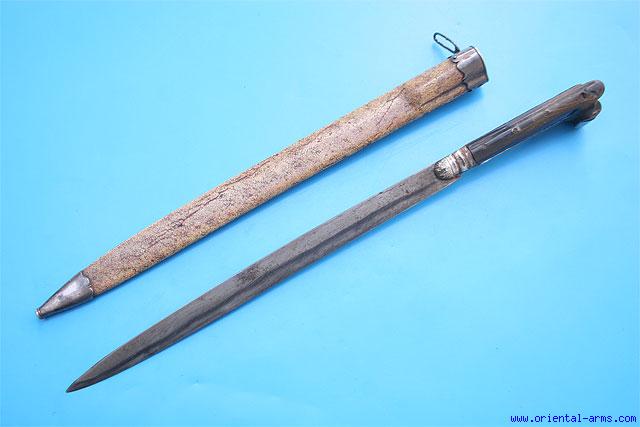 I googled for knives similar to my drawing, and added little elements from them into my design(Namely the arabic Bichaq and Karud knives). 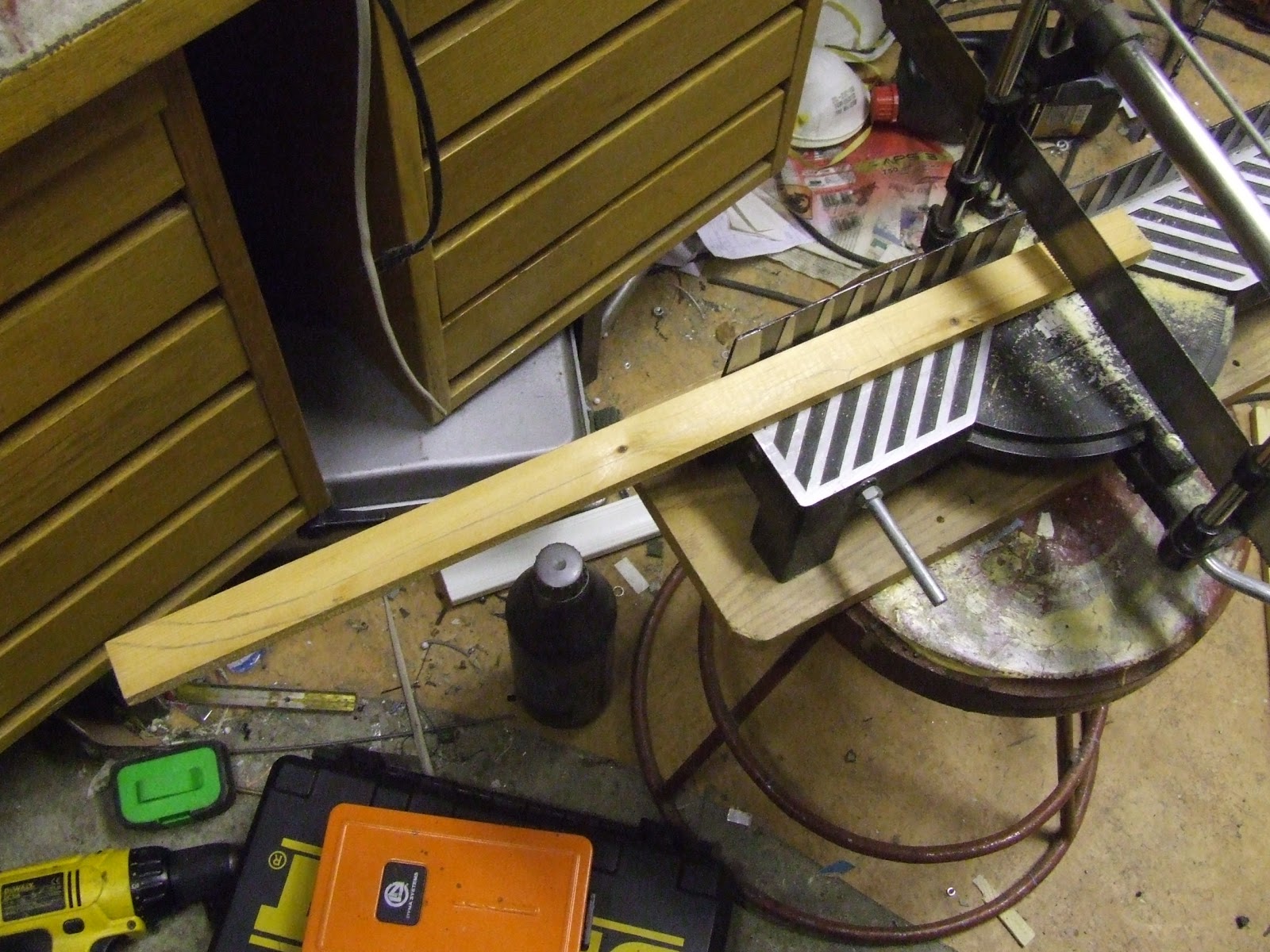 I drew the shape on a thin pine plank, and sawed it first to lenght, then to shape. 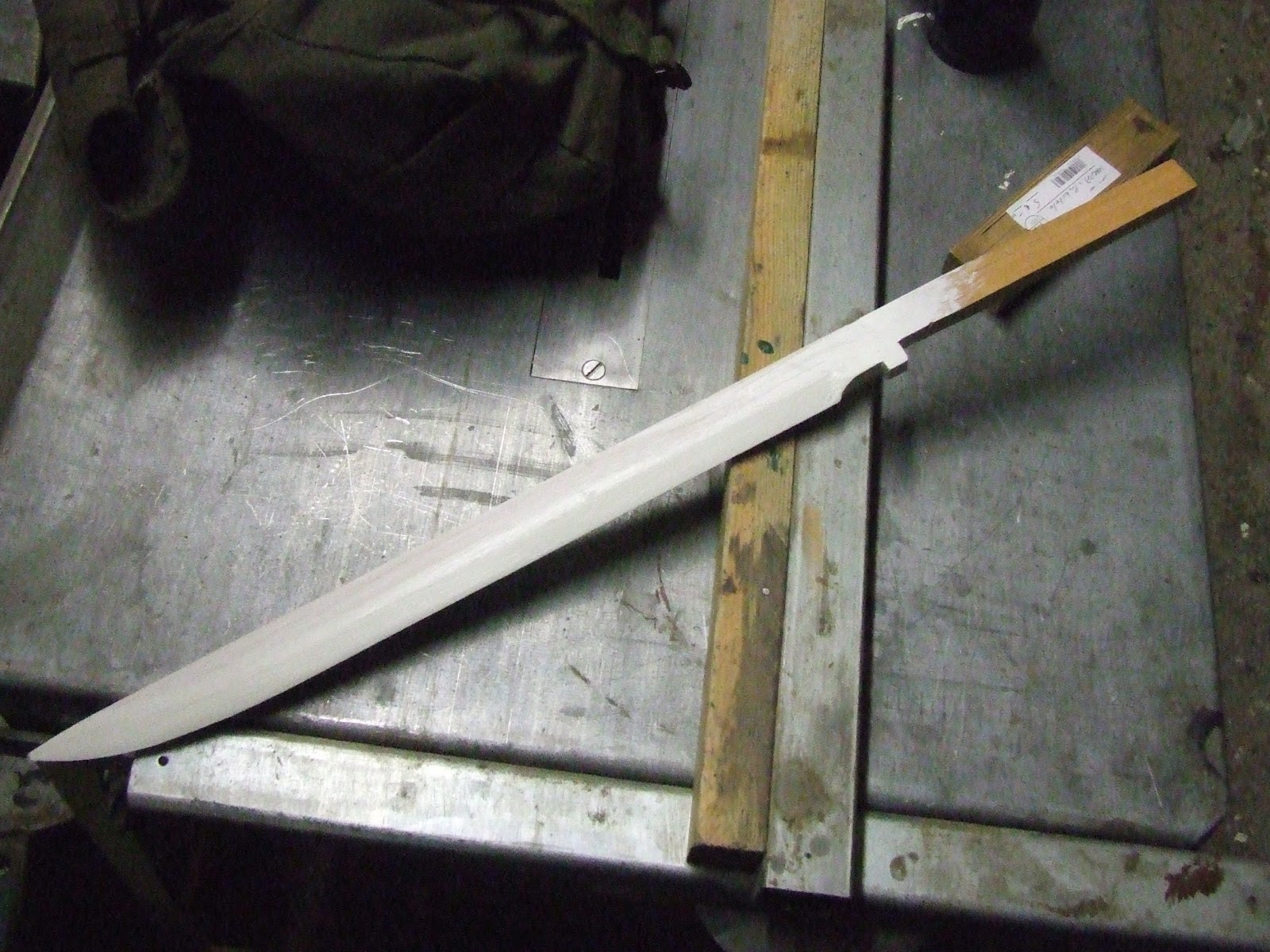 The blade profile was planed, and refined with disksander, dremel, and finally by hand. The blade was primered at this stage too. 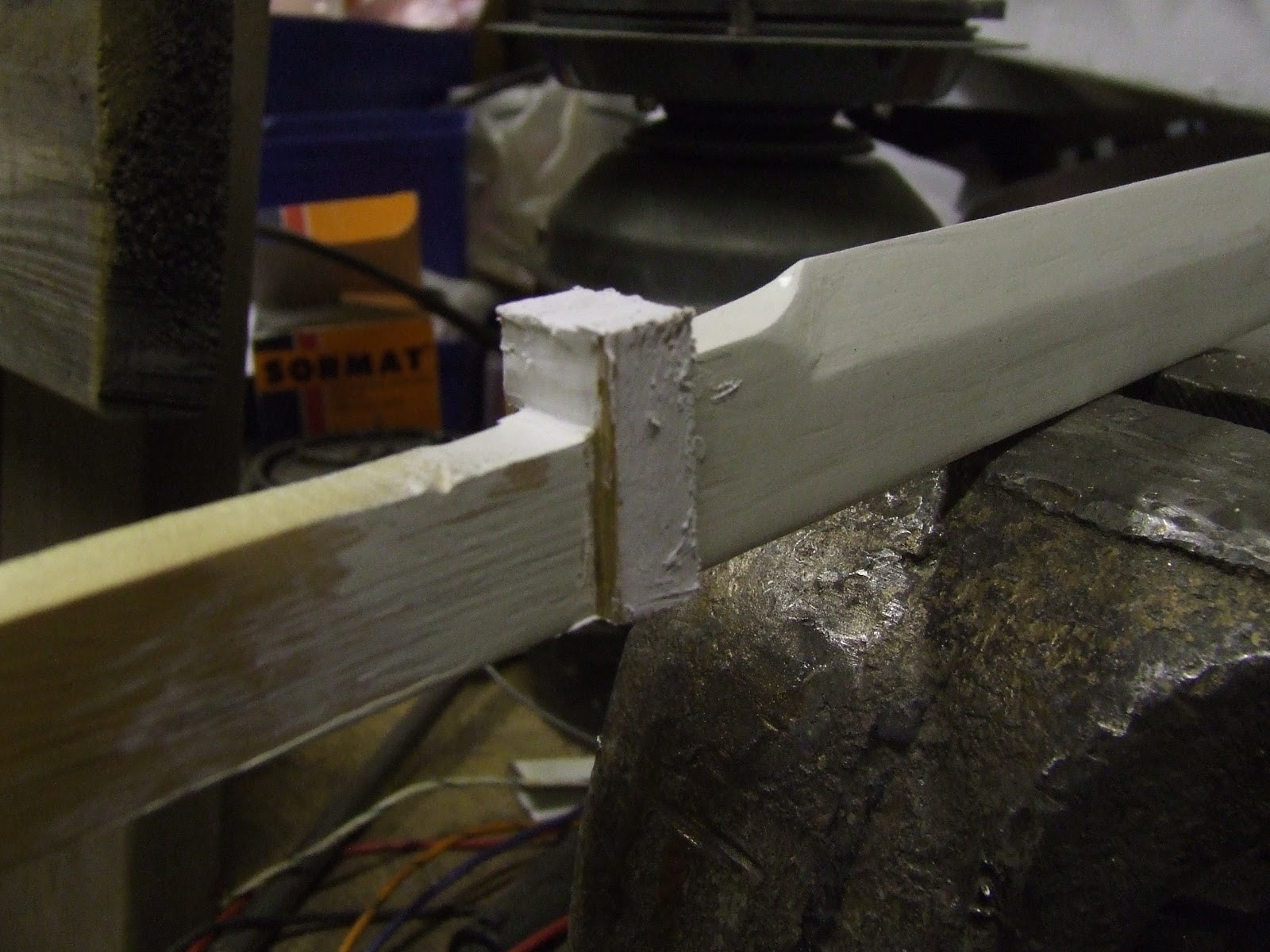 Thinner pieces of pine were used to build the "crossguard". 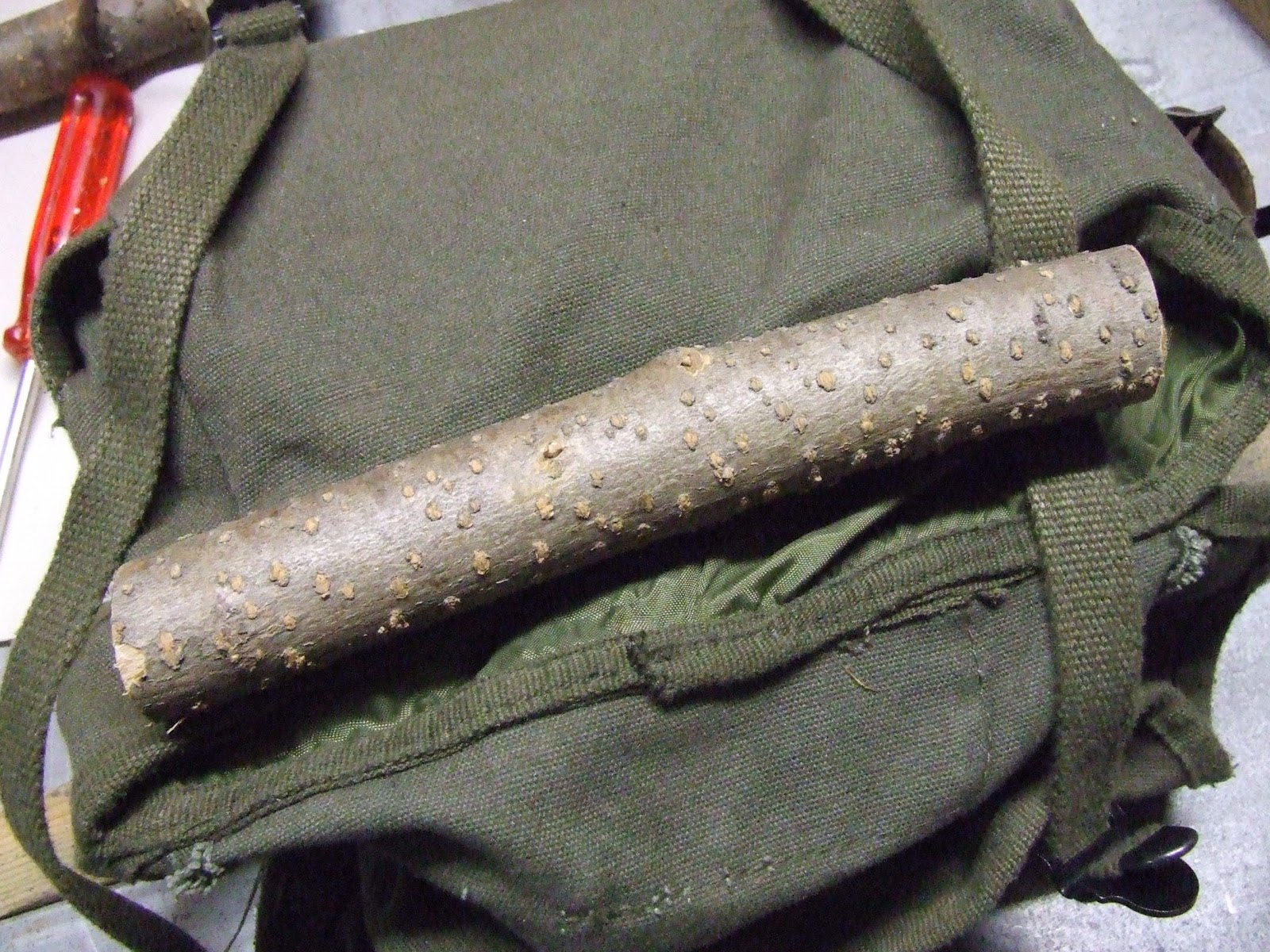 I wanted the handle to have organic and natural look, so I sawed myself a suitable lenght of rowan in suitable thickness. Why rowan? I wanted to use something more expensive-looking wood to implicate,that although crudely handcrafted, this was a weapon of significance. Also, because I happend to have it. 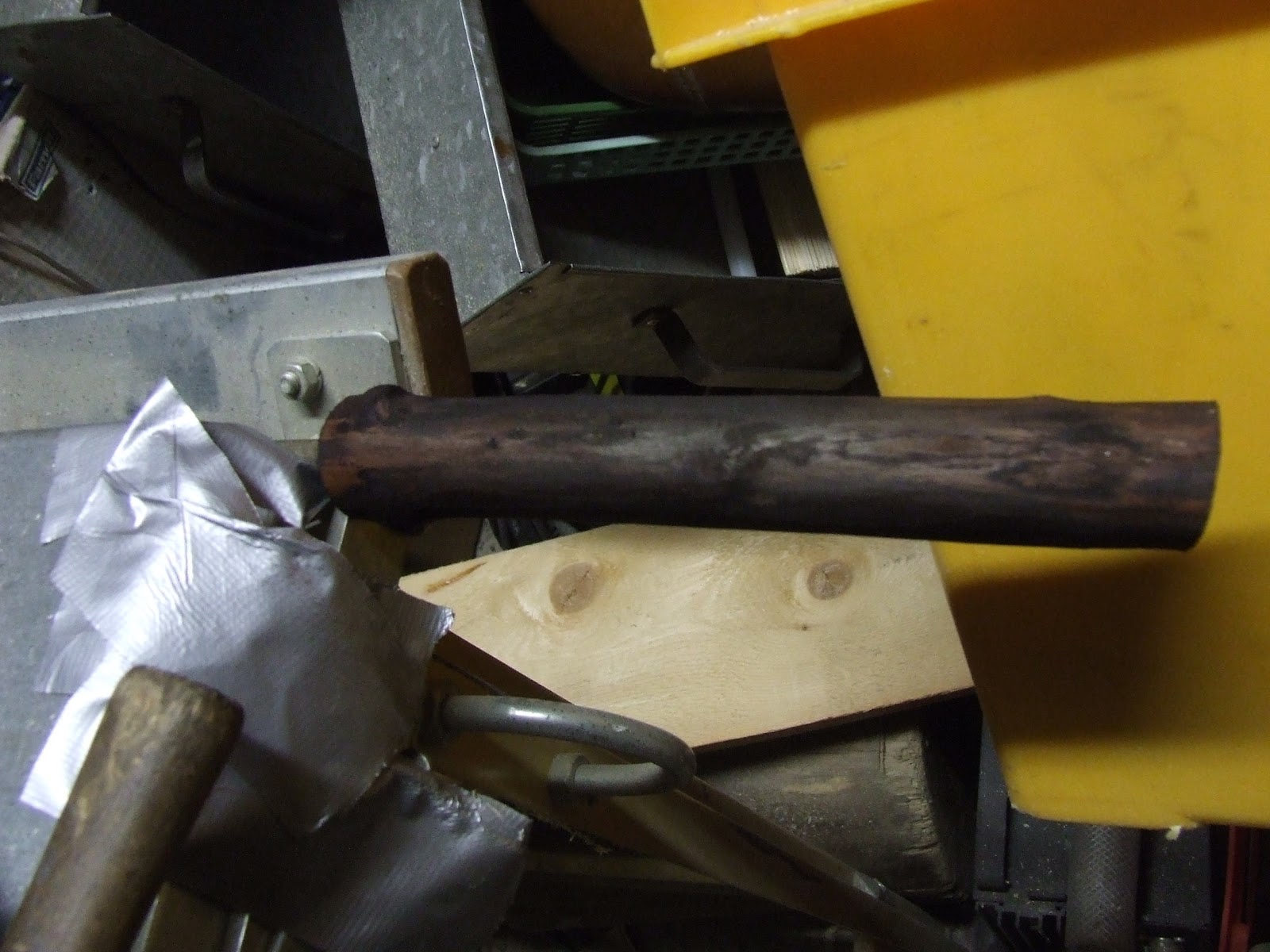 The grip was stripped of bark and stained to a deep walnut color, and later waxed to seal the stain.
Also, a hole was drilled inside the grip to attach the blade into it.
At this point, while tring toseparate the grip from the blade, I managed to shatter the blade. So, I had to remake it. 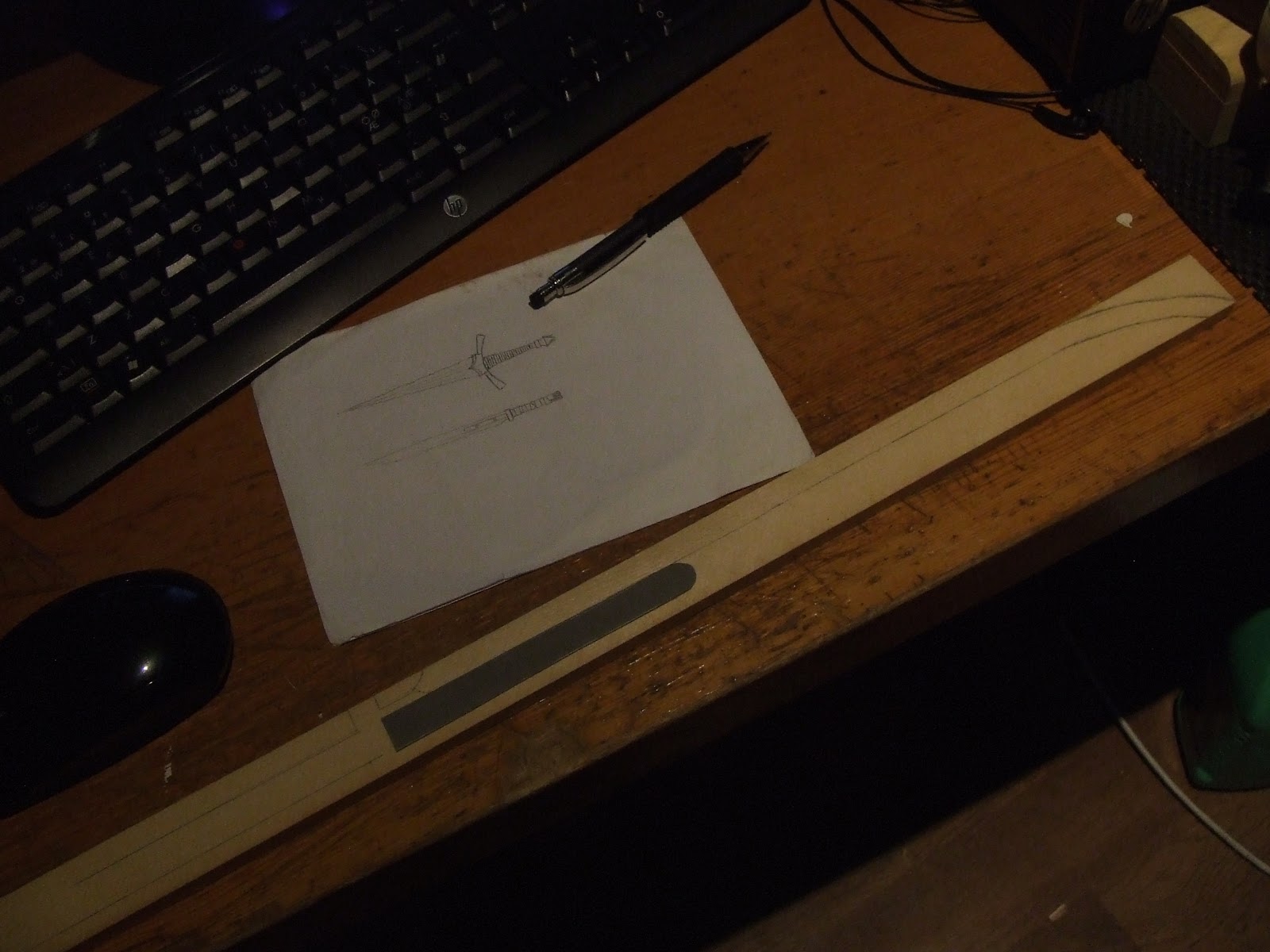 The process was the exact same. In picture is also the original drawing I made. 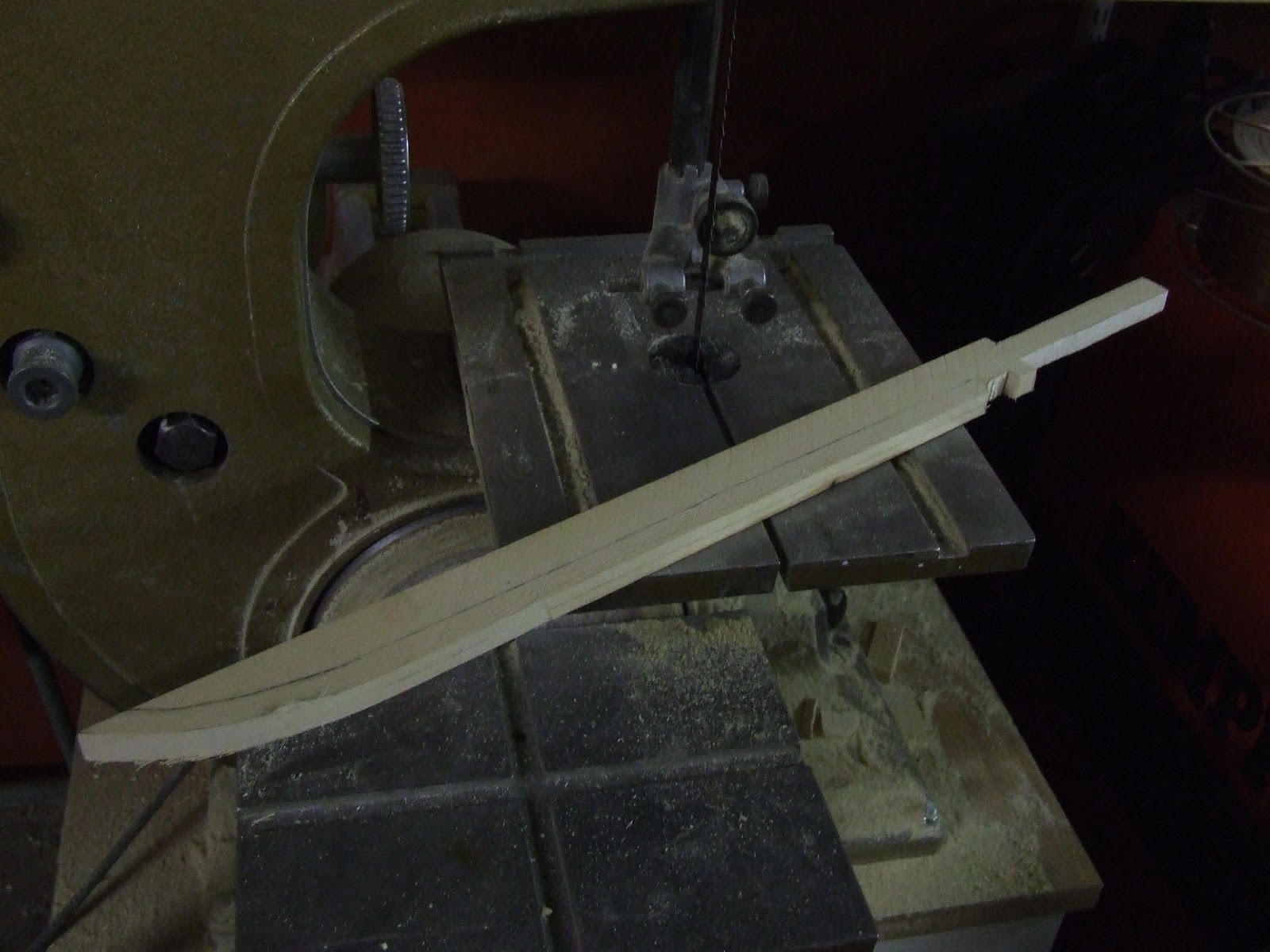 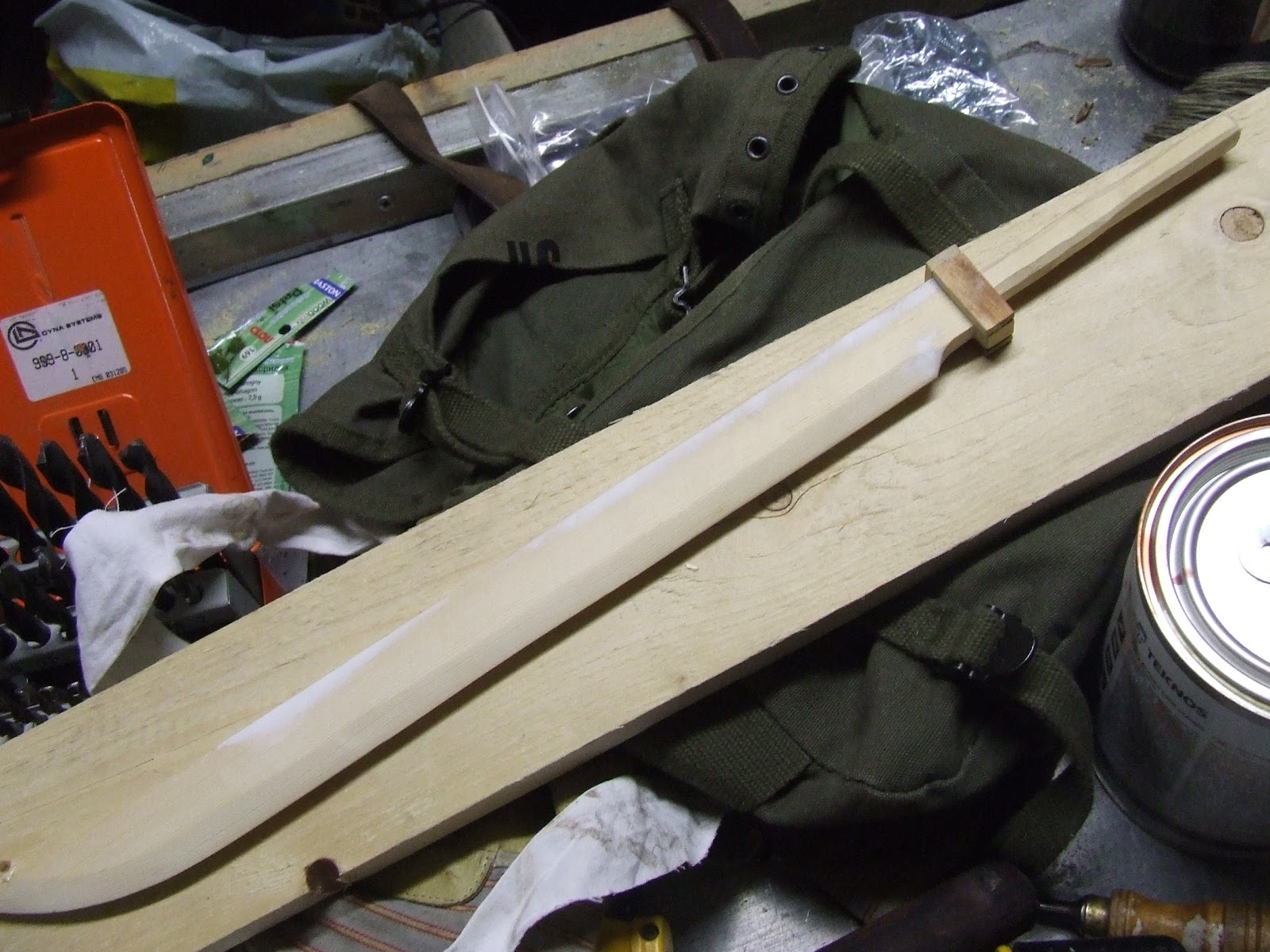 Back where I was, sans the primer. The blade breaking was almost a good thing, as I was able to refine the blade even further when remaking it. 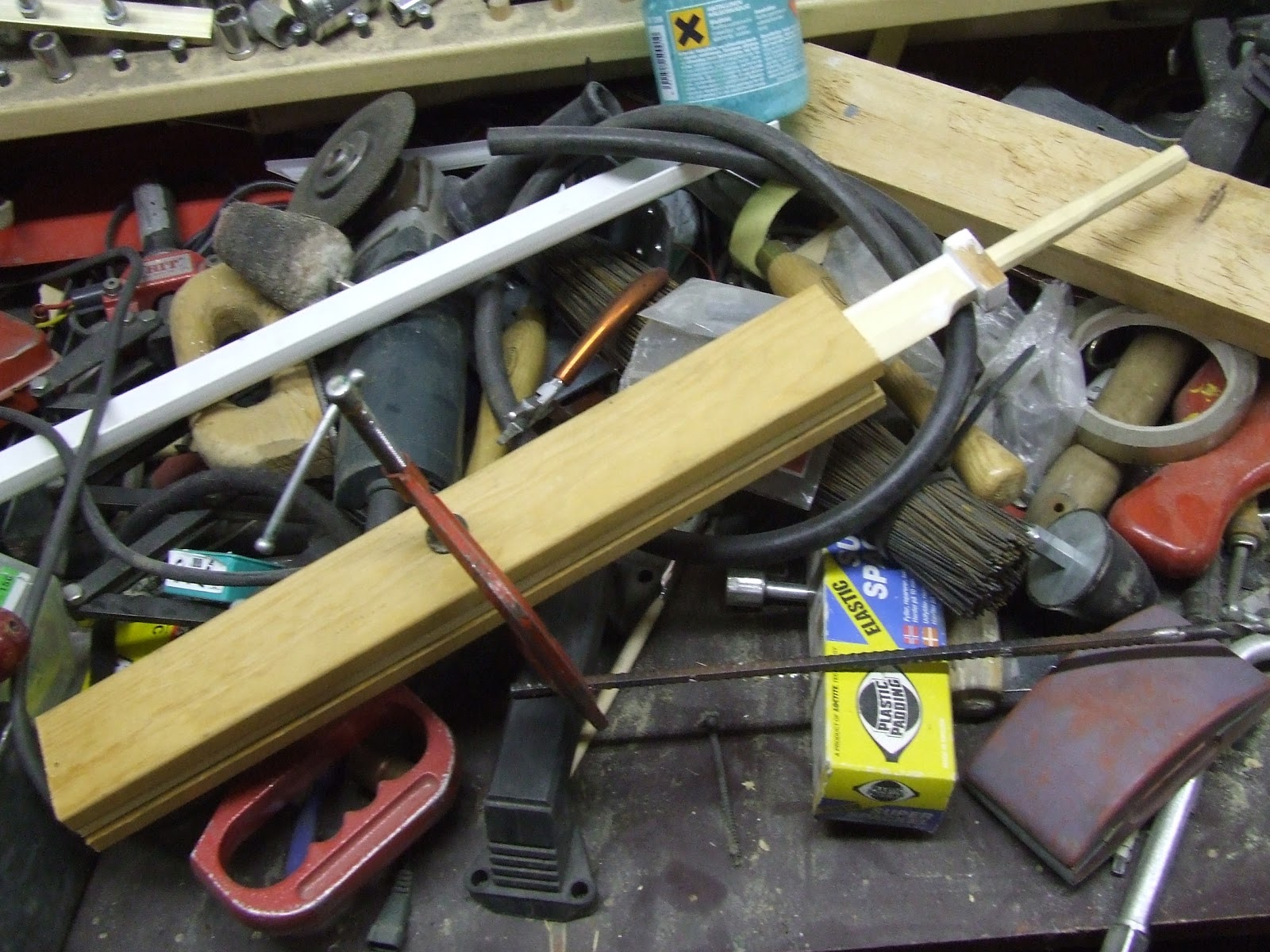 Some more pine was used to make a scabbard for the blade. 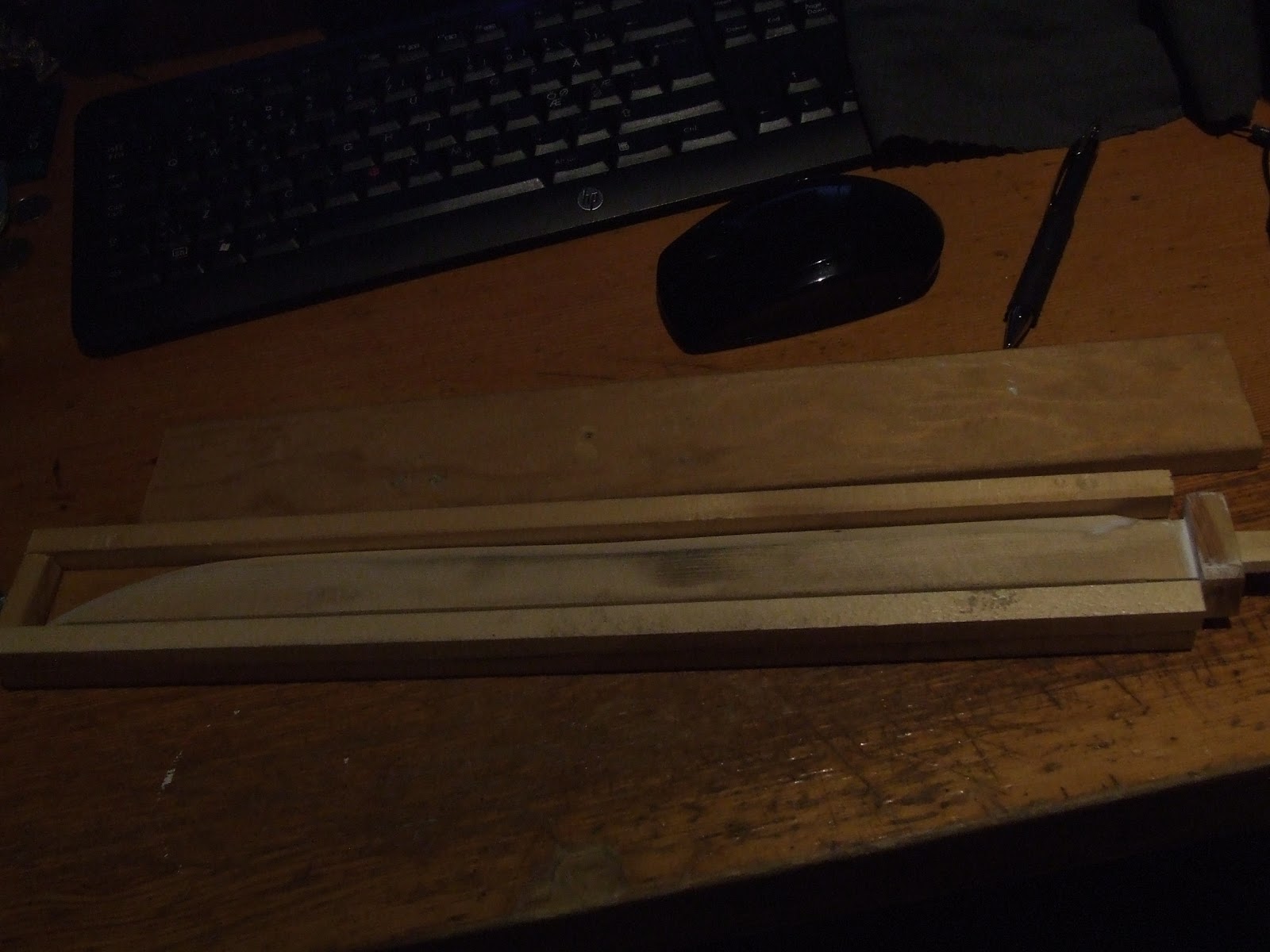 The blade sits snugly inside, with a little play, sothat the fit would be tight once I glued a felt-fabric inside th scabbard to protect the blade 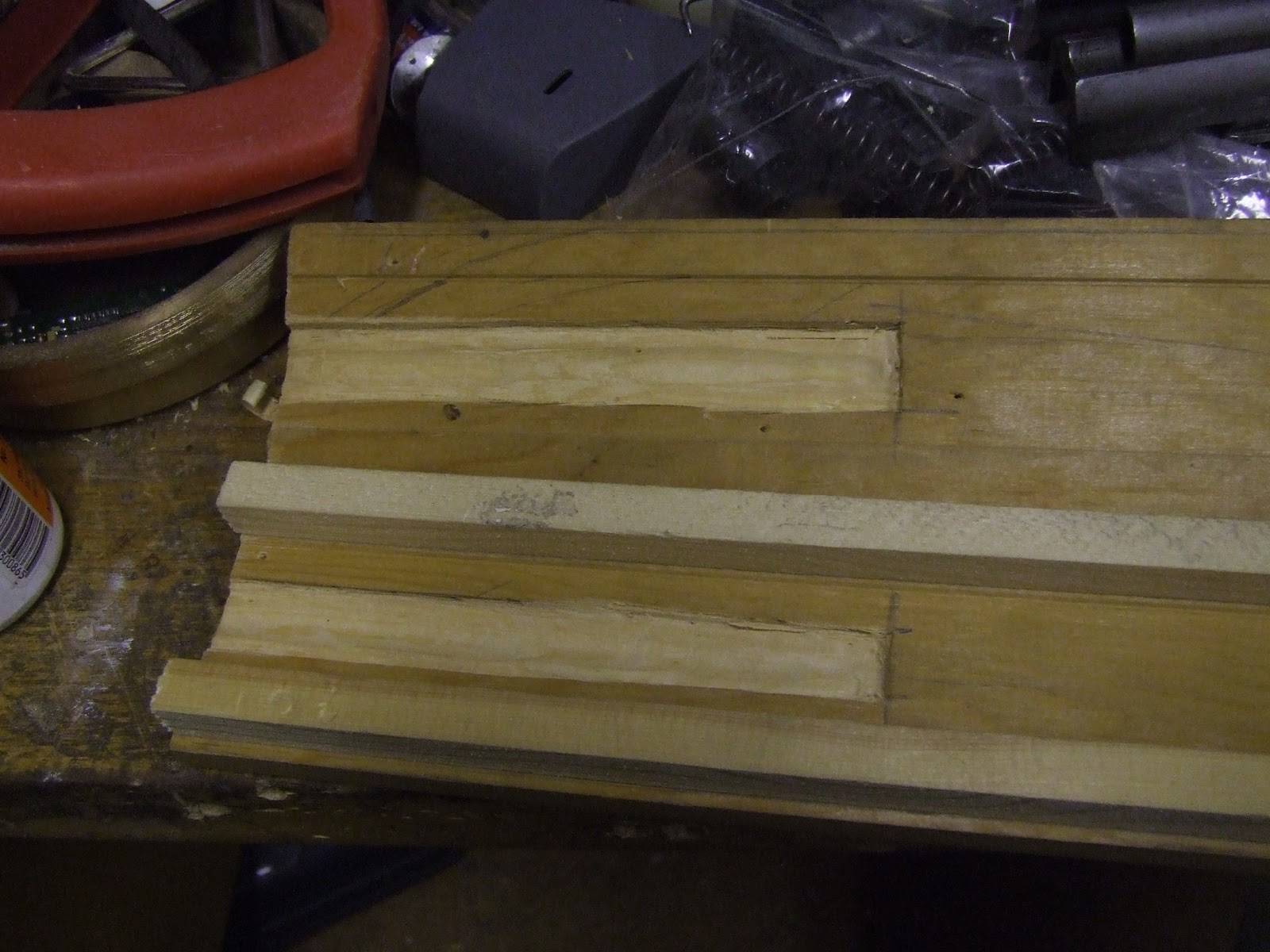 Before that, small slots were chiseled to the scabbard's throat to accommodate the decorative pieces at the base of the blade. 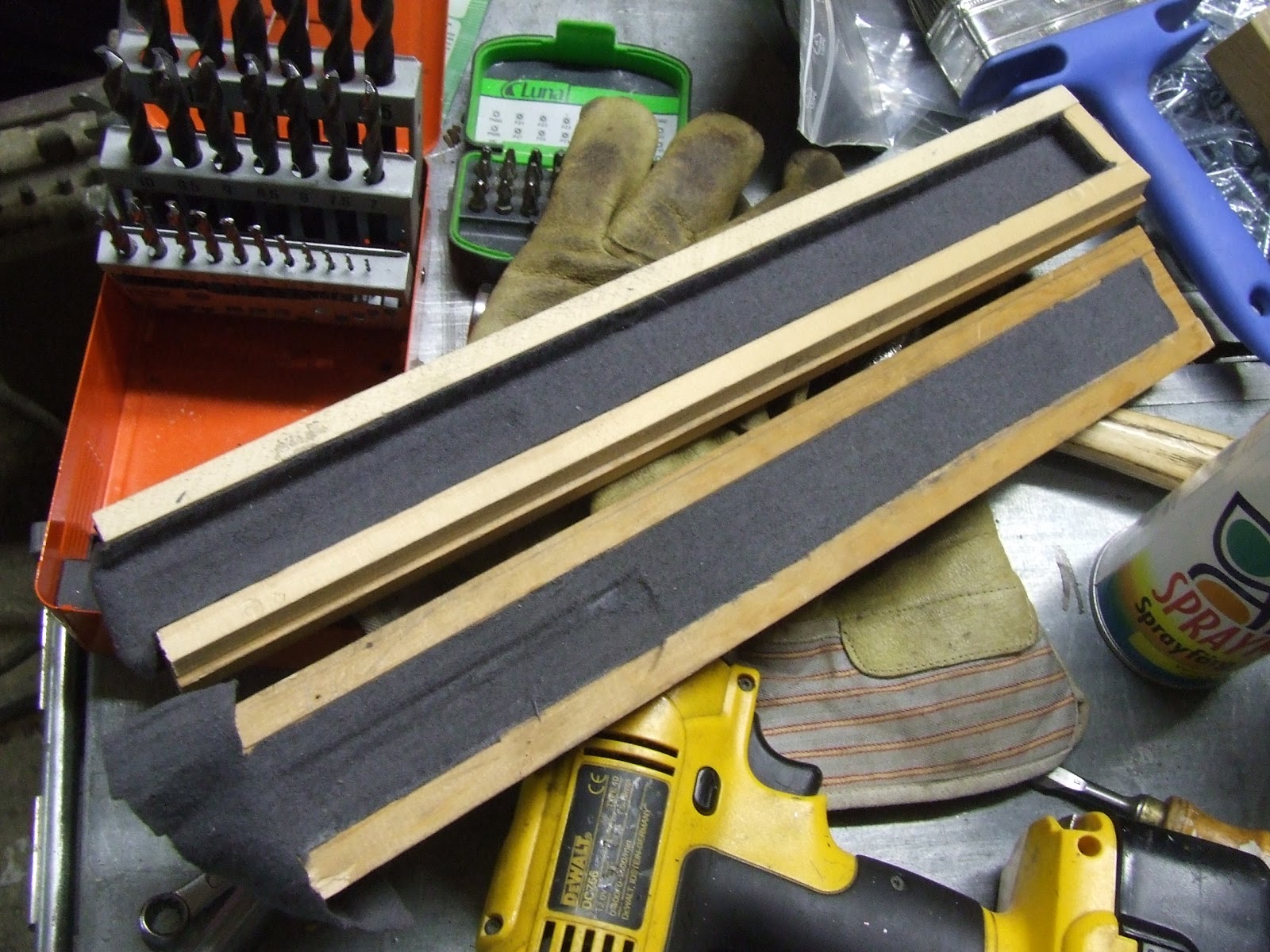 With the felt glued in. 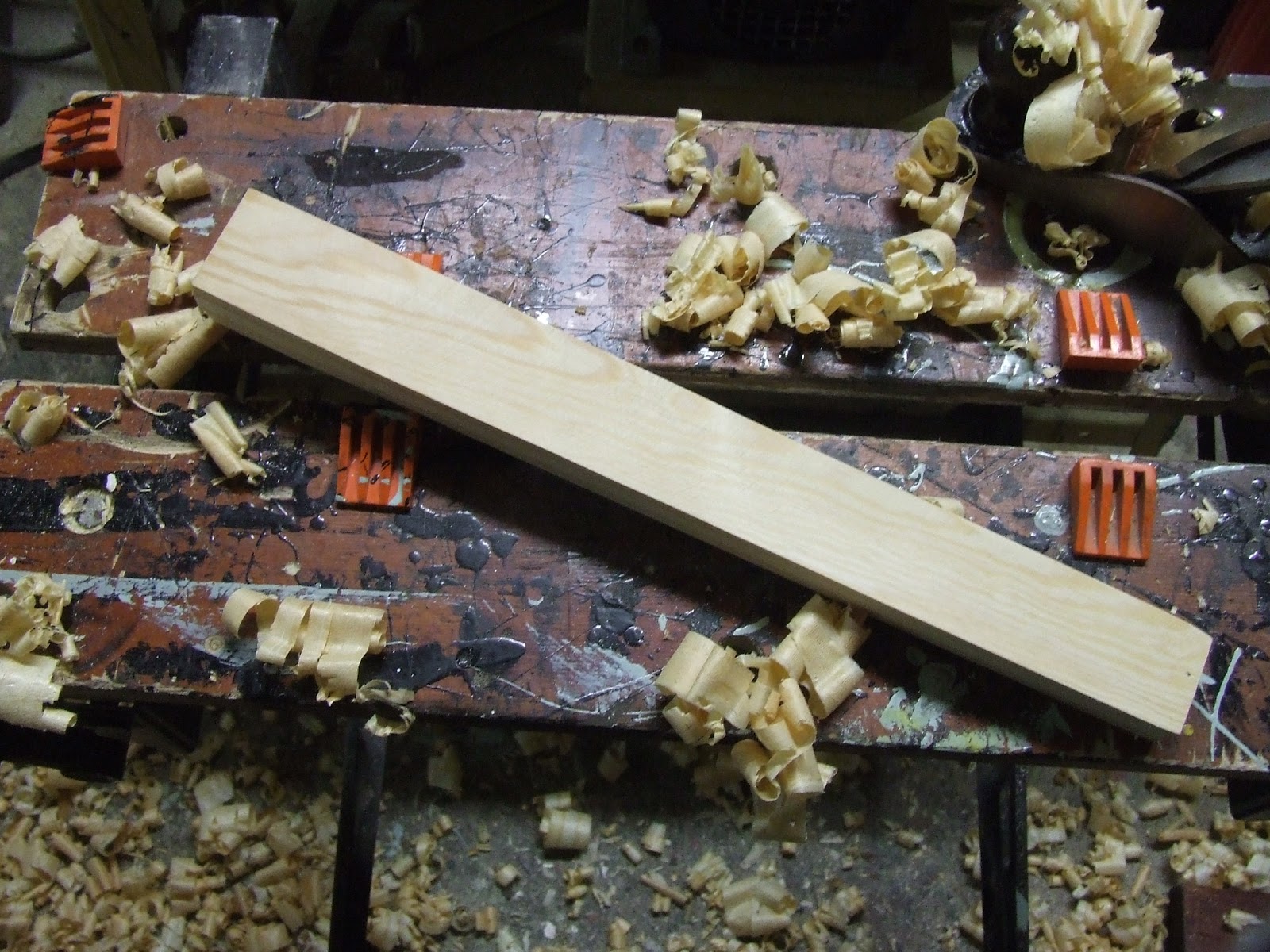 After that, the scabbard was glued together, and planed thinner. I gave it a gentle taper towards the chape. 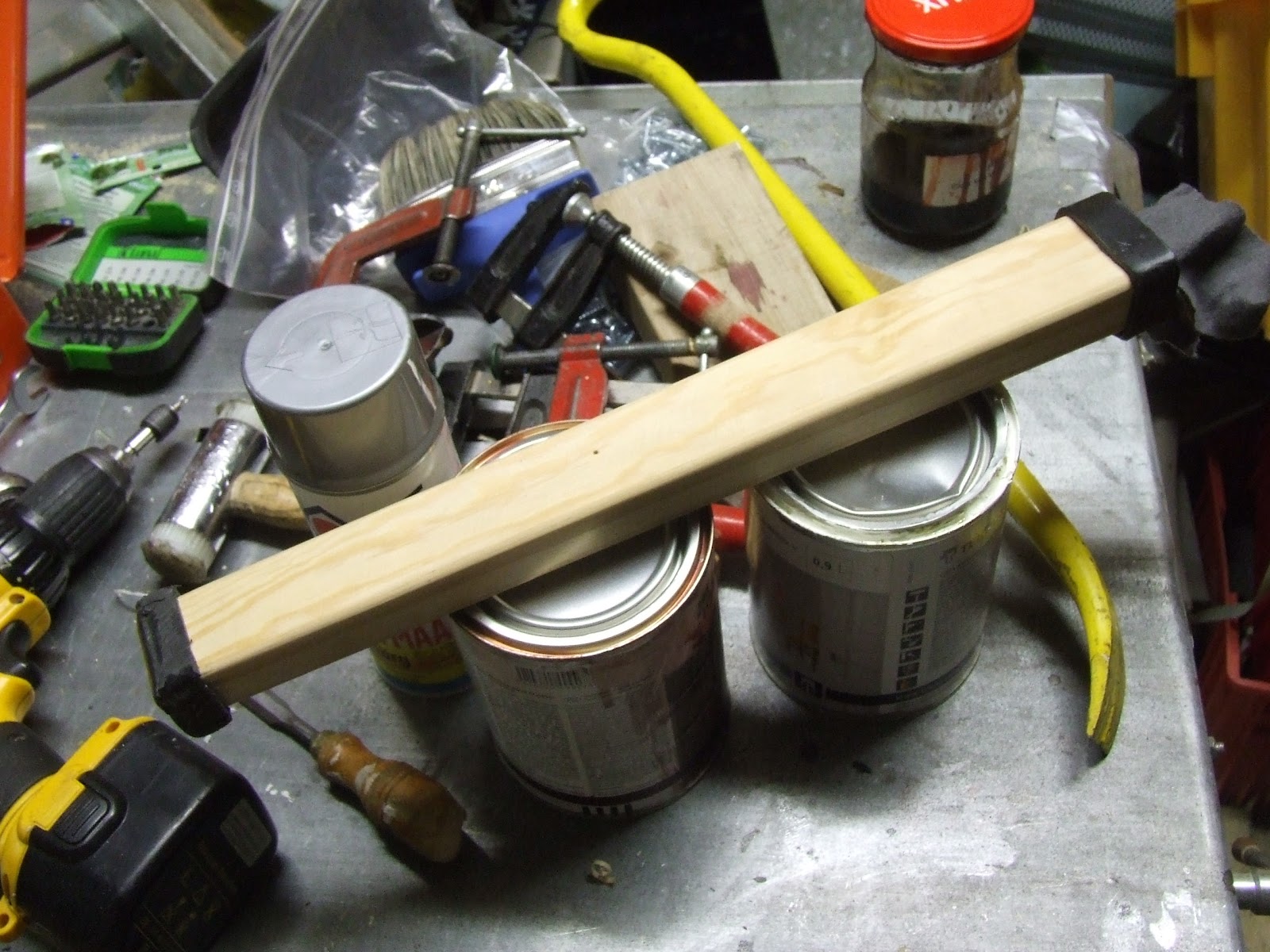 The chape and locket were heat-formed out of thick ABS plastic. A little too thick, in retrospect. The shaping was left a little rought, as if the pieces would ahve been forged. (Also, because I grew tired of burning my fingers) 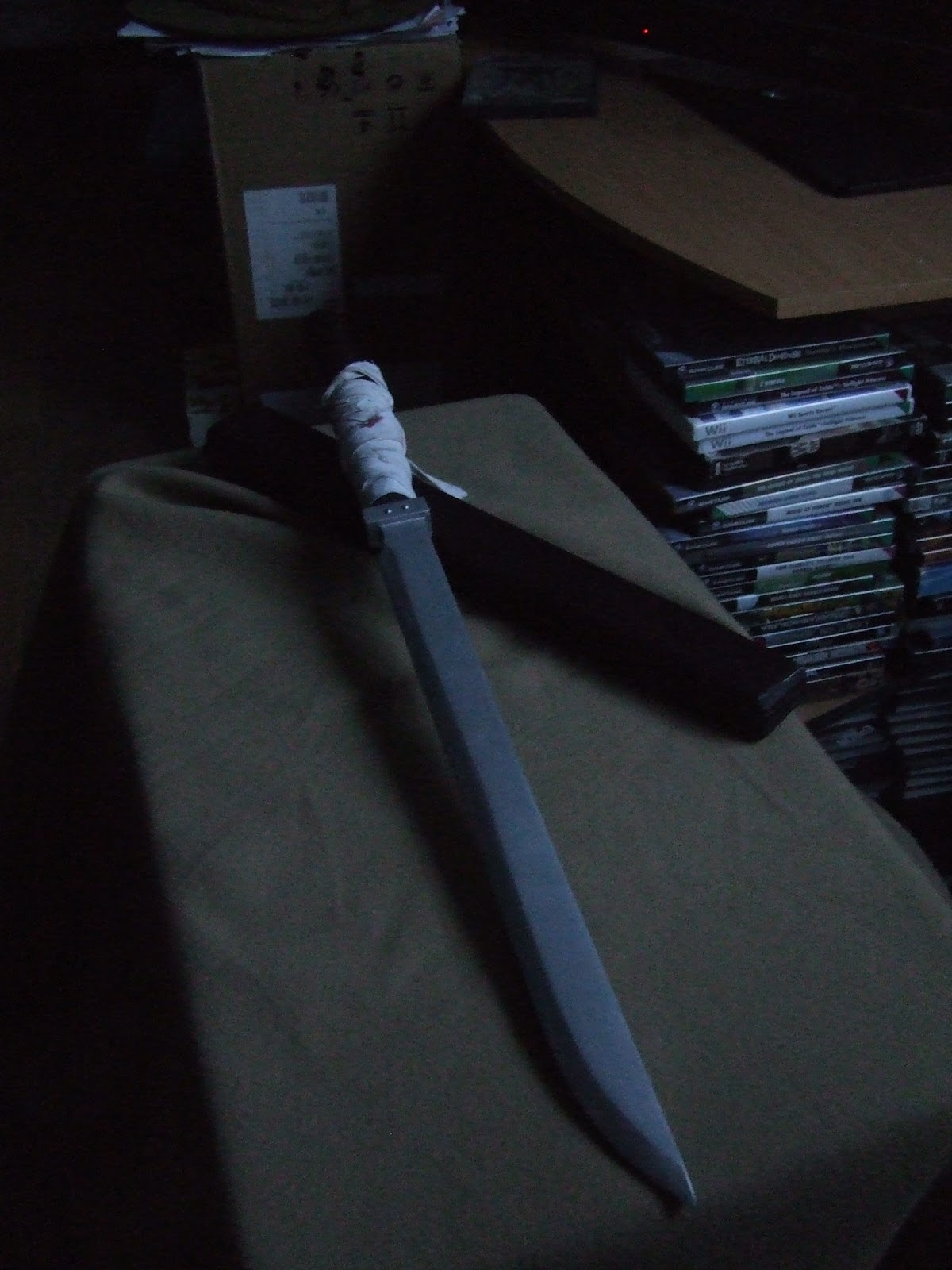 The new blade primered, sanded, and finally painted in silver. The scabbard was also stained in walnut, and sealed with a mixture of beewax and wood oil. 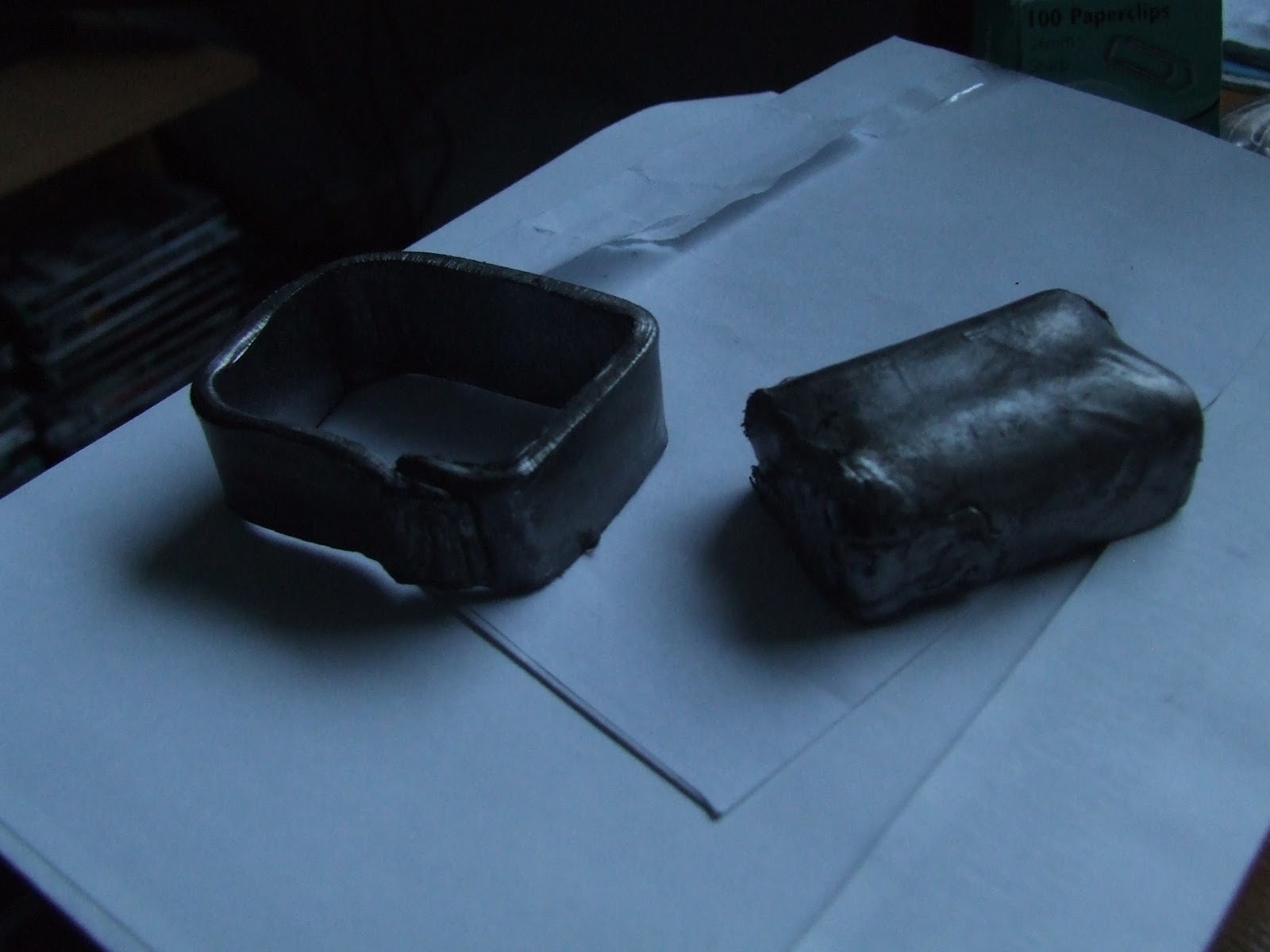 The chape and locket were also painted silver, pictured in the middle stage of weathering process.
Again, I the painting and weathering porcess went in the flow, and I forgot to take pictures along it. 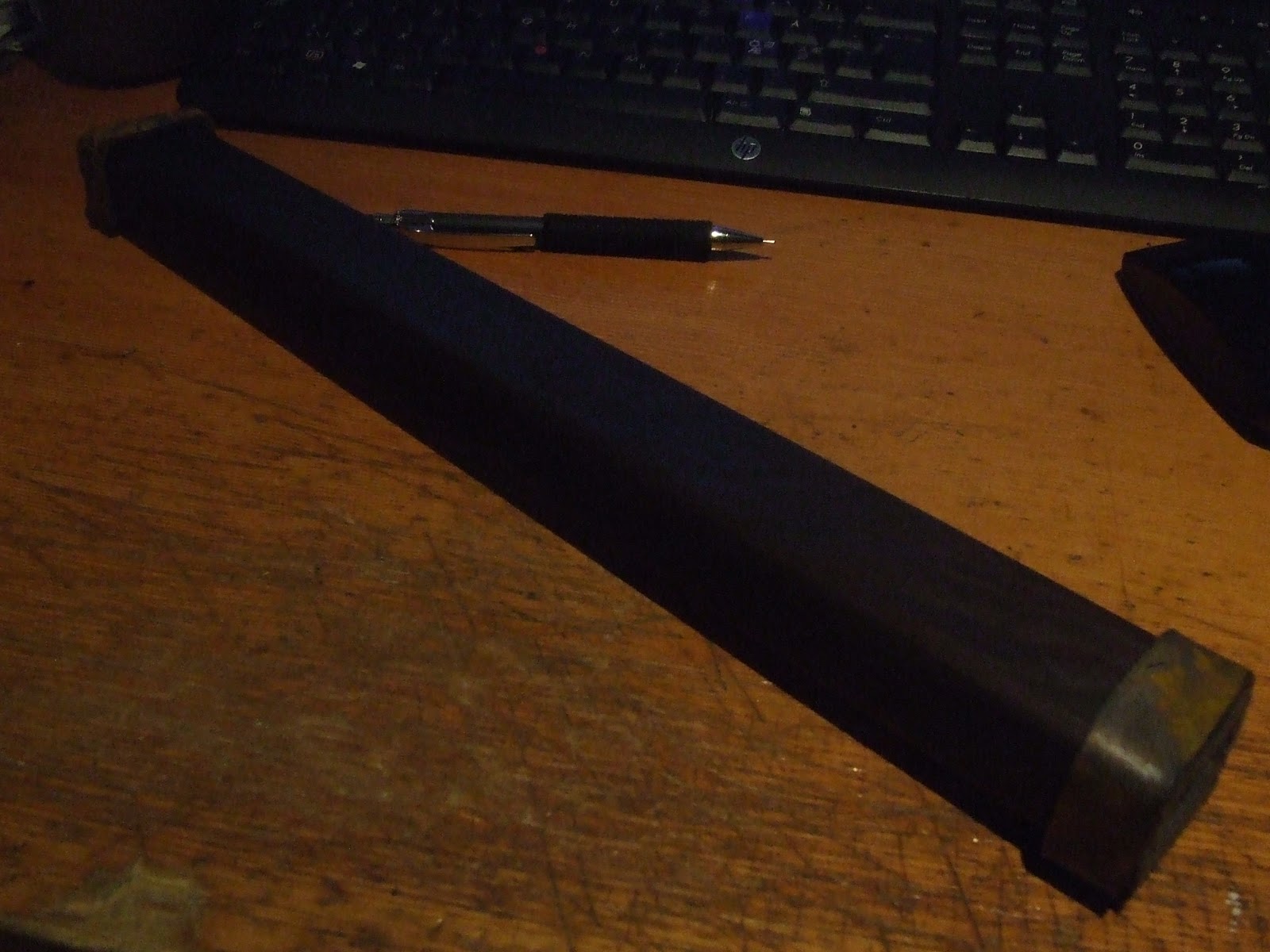 The finished scabbard, with faux rust painted to the chape an locket. 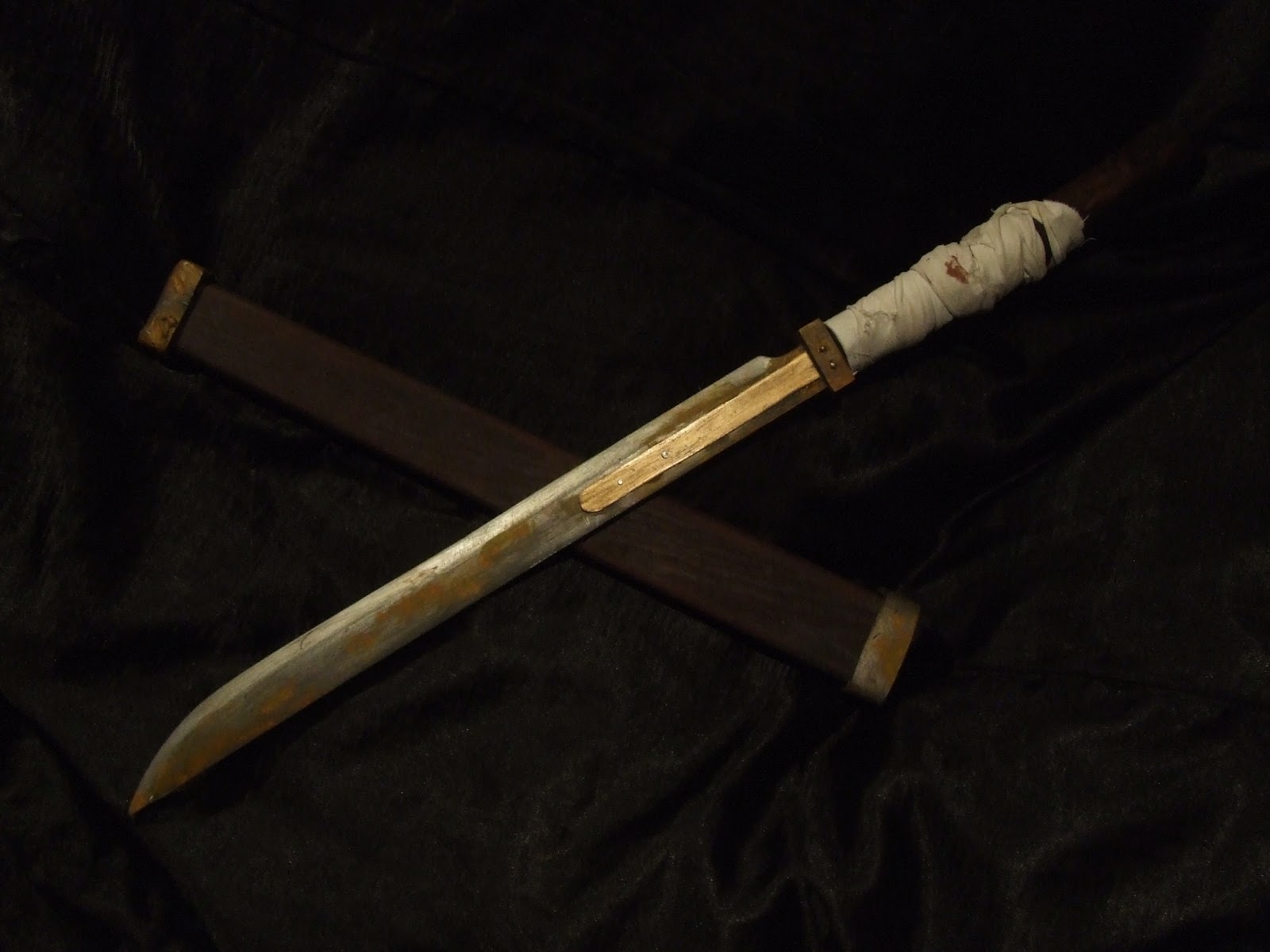 ...And the finished blade. The blade itself was also painted with faux rust. 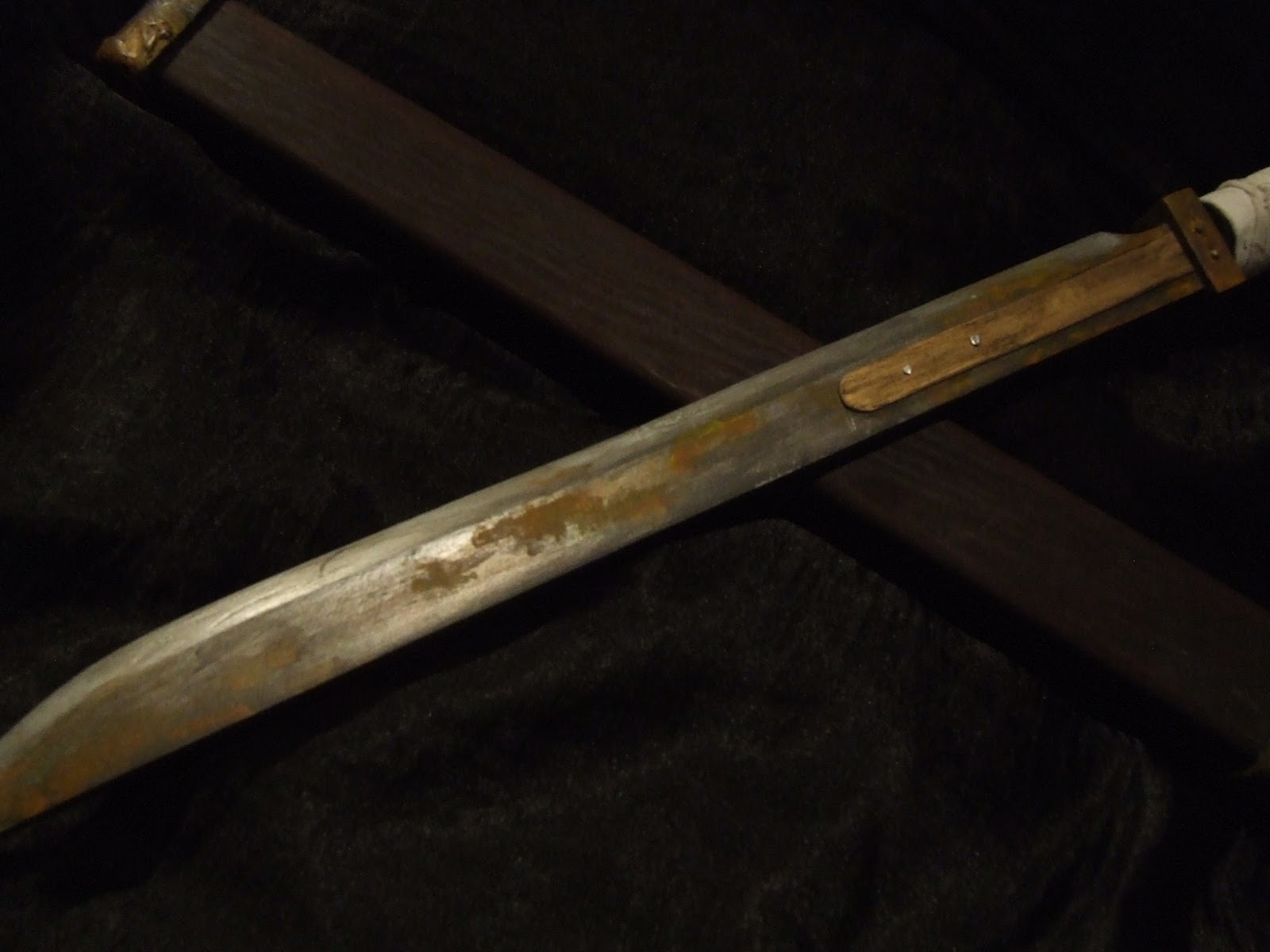 Here also pictured the decorative iece on the blade. 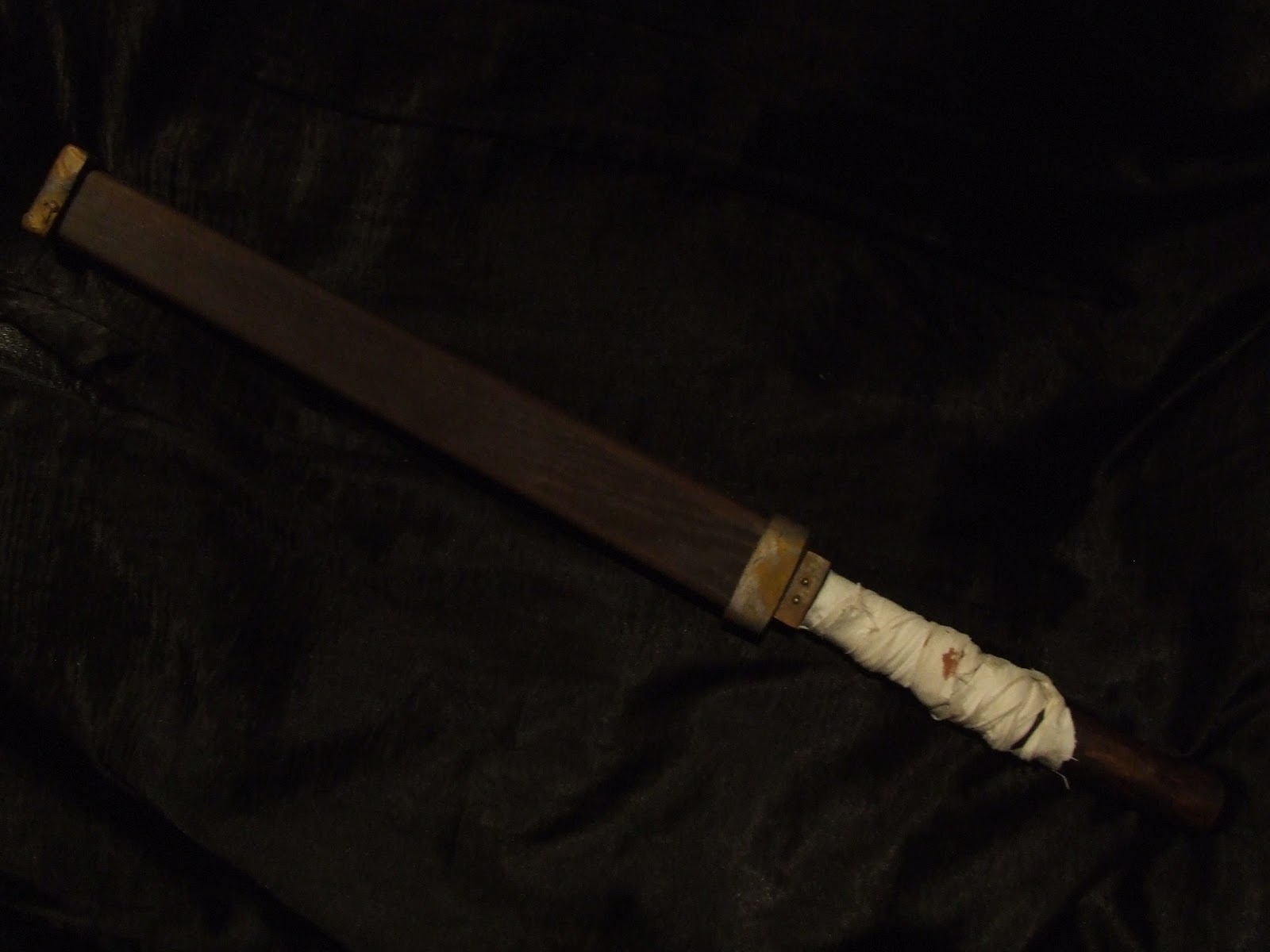 Fits into the scabbar like so. The grip was wrapped witha piece of bedsheet given the approppriate weathering and dirt. That's genuine blood there, the prop-gods demand their sacrifice every now and then =) 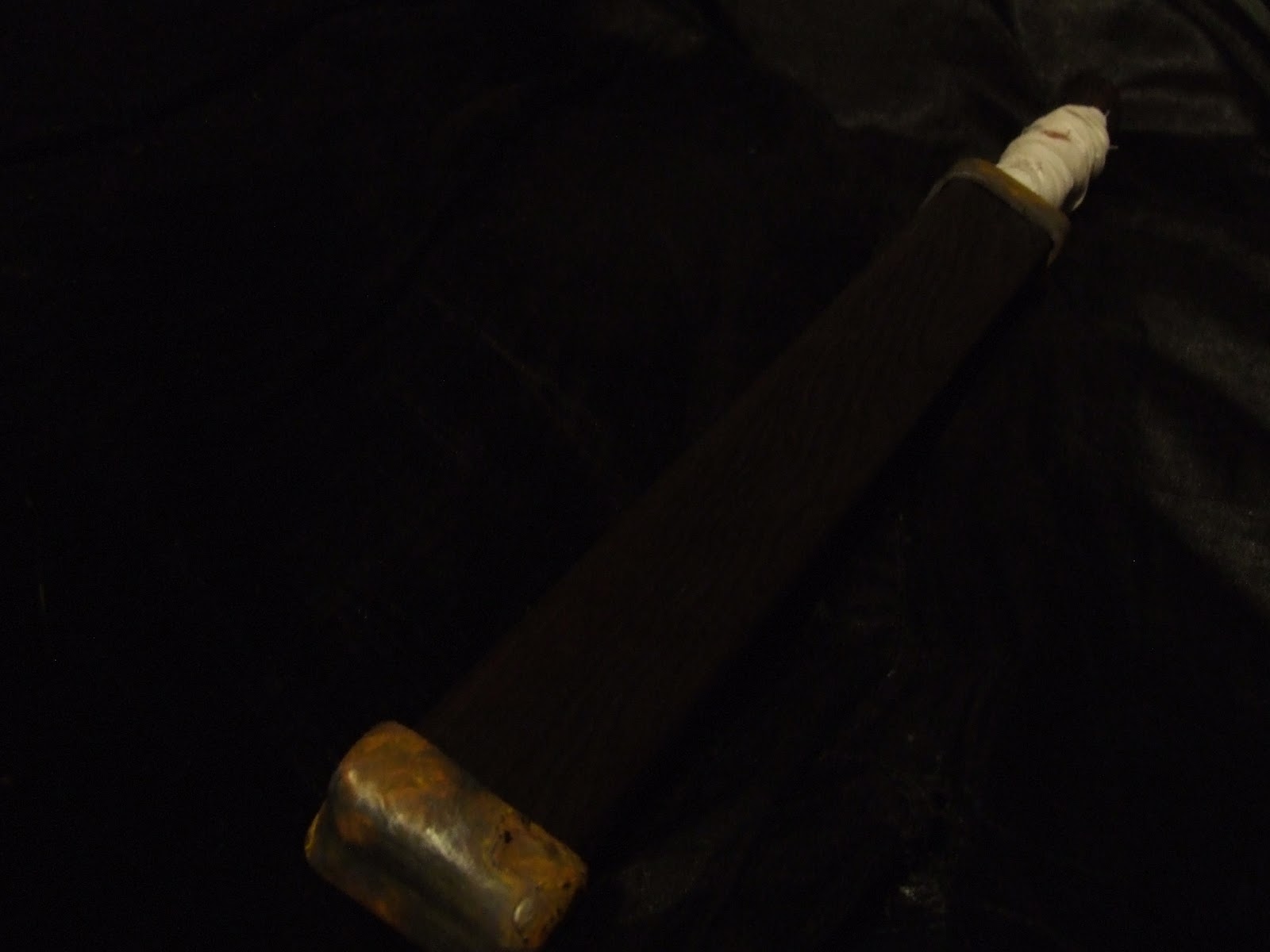 A picture showing the rust accents on the chape. 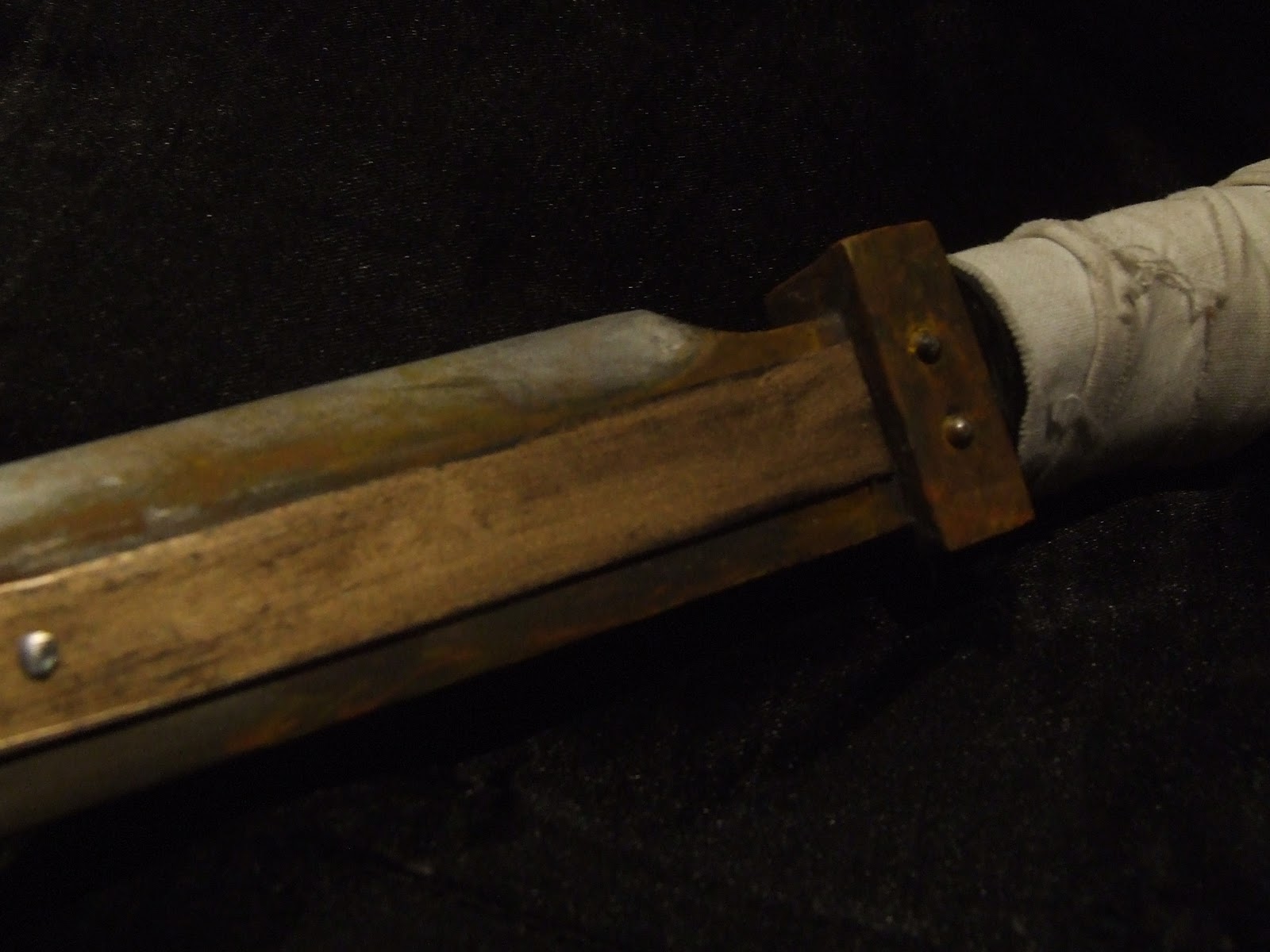 Picture showing hte weathering at the blade's base. I found a picture of a bayonet with two rivets on the crossguard, so I decided to add similar ones to my knife too. 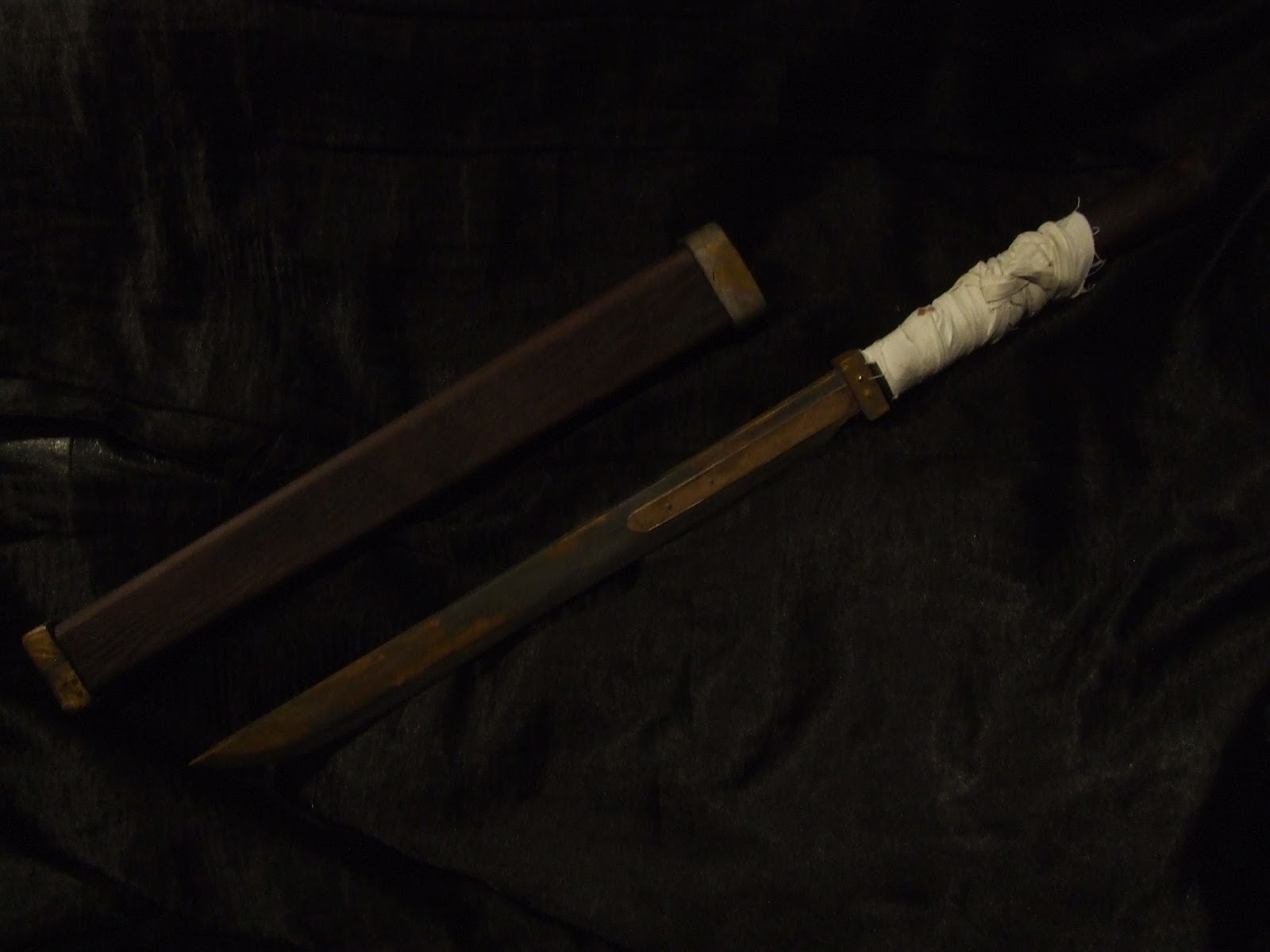